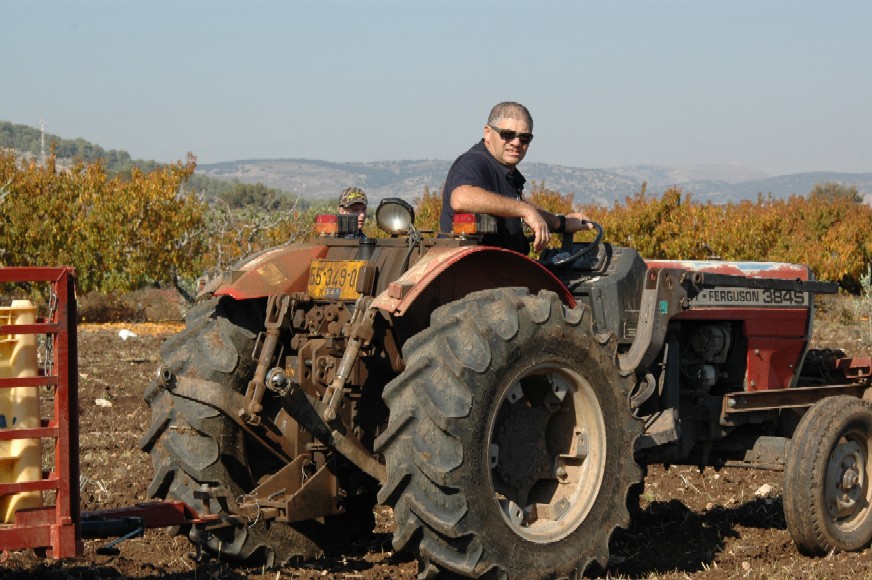 Why Jewish Labor Must Be Supported

Yesterday, a bunch of us went out to an agricultural field in Rosh Pina which is located in Israel’s Upper Galilee.  We brought shovels and the necessary tools to dig holes.  After a few hours of sweaty labor we had dug 130 holes and filled them with 130 Olive trees.  Our group consisted of teachers, housewives, a rabbi, a farmer, an optician, and some students.  Our group was made up of Ashkenazim, Sephardim, Yemenites, Americans, and Israelis.  In sum, our group was a true mix of Jews.

While working in the hot sun the farmer came up to me and told me that he could bring a couple of Thai workers to finish off as they are in better shape and are used to the heat.  My response to his suggestion was, “not now, not ever.”  I made it clear that our project was intended from the outset to use only Jewish workers and/or Jewish volunteers.  We finished just as we’ve finished previous lots of land.

The Jewish People both in Israel and the Diaspora have to learn from our rich history.   The fact that millions of Jews now call Eretz Yisrael (The Land of Israel) home by living in it and that additional millions can come home if they choose to, came about for a few reasons.  Of course had G-d not willed it, it wouldn’t have happened.  We must believe and trust in G-d, but we also must show that we are ready to sacrifice, that we are committed to the idea.  Thousands of young Jews gave their lives fighting for our right to settle Eretz Yisrael.  In addition countless young idealistic Jews from many backgrounds and many countries gave their all to settle the land by draining swamps and making the desert bloom.

Originally, the Jewish worker was proud to do the difficult jobs.  Many places only employed Jews.  Unfortunately many Arabs from neighboring states wanted ‘in’ and came to Eretz Yisrael seeking employment.  Greedy employers looking for cheap labor gave them work but they were a minority.  Unfortunately, since the founding of the State in 1948, ever so slowly the Jewish worker has been replaced by both Arabs as well as hundreds of thousands of illegal immigrants.  By ‘saving’ money we’ve seen a tremendous wave of young Jewish Israelis fleeing abroad to find employment.  The media and the education system have at best done nothing to encourage Jewish Labor and at worst have denigrated it to ‘Avoda Shchora’ or Black Work.  The Social Welfare system has also contributed to the problem by paying healthy, young, Israelis to stay home and collect a monthly check.

Today, the big money employers will do anything to employ anybody from anywhere as long as he/she is cheap.  The country is being infiltrated by 10’s of thousands of Sudanese and the greedy employers are employing them as quick as possible just to save a few shekels per hour.  They don’t care about the crime they commit or about all the neighborhoods they destroy.  Including, government agencies such as Bituach Leumi (National Insurance) openly place Philippine and other foreign care takers to assist our elderly.  Recently Kibbutz Kinneret in the Jordan Valley Regional Council began laying off long time Jewish elderly care workers and is regularly replacing them with foreign non-Jewish care workers.

With all the money being saved one would expect the economy to benefit.  Unfortunately it doesn’t work that way.  Go to any city’s main post office and you’ll see the same foreign, non-Jewish workers standing in line.  Are they there to purchase stamps?  Not usually.  They are generally there exchanging their Israeli pay money to the currency of their home countries and then wiring a huge bulk of their earnings to their home countries.  Wouldn’t it be wiser to keep the Israeli Jewish worker employed, treat him/her like our religion tells us to, meaning like a respected human being, and as a result keep the money working in Israel?  Wouldn’t it be much more beneficial to the country to have army age youths who aren’t fit for army service do some of the gardening for Israeli cities instead of importing foreign workers?  Doesn’t it make more sense to have young Jews who aren’t army material help out with our elderly instead of something useless like drive a low level commander around or in some cases sit and read a book all day as a ‘jobnik’ while waiting for the 3 year volunteer service to end?

What has happened by discouraging Jews not to do the physical jobs has grown into a monster.  First it was only unskilled labor.  Then it grew to semi-skilled labor.  Then it grew to manual highly skilled labor.  Now modern programs have been fully implemented that encourage affirmative action that is now turning out 10’s of thousands of Arab professionals.  Does anyone bother to look at the big picture of how much less it costs to live in most Arab areas?  Does anyone realize how many hundreds of thousands of illegal Arab houses have been constructed, are being constructed, without permits, without inspections, without land being paid for?  How many Arab businesses are not paying any taxes both in Value Added Tax (sales tax) or income tax simply because the government authorities are too frightened to go into their respective villages and enforce the law?  While the Leftist dominated media along with the Leftist politicians keep beating on the Hareidim (Ultra Orthodox) as parasites, a growing fifth column of Muslim Arabs (who far outnumber the Hareidim) do no army service, no National service, and pay little or no taxes, with barely a word whispered by the so called ethical and moral leaders of the Left.

Much more can be said and in future articles G-d willing, will be said.  In the meantime we must learn to respect the Jewish worker and to encourage our youth that it’s not shameful to do all kinds of work.  Computers and High Tech have their place and we should continue to be a world leader in these areas.  Not everybody however, is meant to be a lawyer, a doctor, a computer whiz.  Even those that are can do some short term service in manual labor before beginning their careers in order to lower our heavy dependence on those who have no allegiance to the Jewish People.

The Arabs know that by the Jews concentrating in such metropolises such as Tel Aviv the buildings will get higher but they won’t take up much land.  They know that by working the land they can acquire more and more of it until they control virtually all of it.  It’s getting late but it’s far from over.  Support projects such as Buy a Piece of  Israel and own a part of Israel (or donate towards the Save the Galilee initiative by contributing to Friends of B’Ahavat Yisrael by sponsoring Galilee land purchases [see www.byisrael.net]).  The theme is to keep putting land permanently in Jewish hands, because it’s time.  Time to take our country back!